The Goma (護摩) ritual, originally called Homa is considered to be one of the Shingon Buddhist esoteric rituals.

It is believed that by burning Goma-gi (護摩木), wooden sticks on which prayers are written, along with other offerings, one burns off all kinds of passions and obstacles to fulfill the worshipers’ desires. 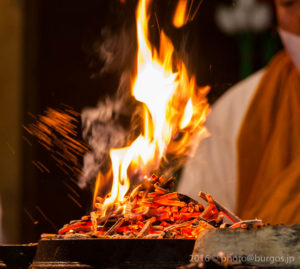 Sho-Hassenmai-Goma-Ku-Shugyo is considered as one of the highest secrets of the Goma rituals.

The monk who attempts this ritual, practices 3 times a day for 3 weeks. Each practice lasts about 2 hours. The practice consists of chanting the Shingon sect Fudō-myōō (不動明王) Jiku-no-shu (慈救呪) or Mantra of Compassionate Help, 100,000 times.

The monk must first purify himself by abstaining from eating meat during the first 2 weeks. The third week will be a complete fast. The final day without water.

On the final day, he will burn 8,000 wooden sticks, destroying all obstacles, while praying to fulfill the worshipers’ desires.

This esoteric ritual is considered one of the most difficult to execute. However, it is believed to use magical powers to achieve miraculous results.