My name is Takuji Kanamoto, chief priest of Oyama-ji. 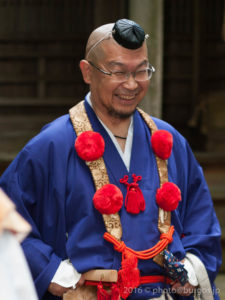 By the good fortune of marriage, I have been able to live in Kamogawa since 1993. Before we got married, my wife brought me to visit this temple.

The main building has a magnificent, long history. It has been recognized as an Important Cultural Property of Chiba Prefecture. However, after many years of neglect, it has become damaged. In some places, it suffers from water damage due to leaks. 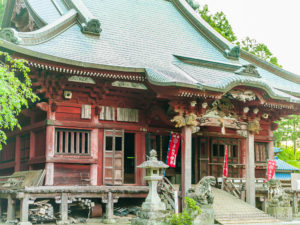 At first, I was struck with awe by the main Image of the temple, a statue of Fudoo Myoo enshrined in Zushi, both of which are also Important Cultural Properties of Chiba Prefecture. The Zushi shrine was built in a ‘palace style’ and it was apparent that is was at one time, painted. 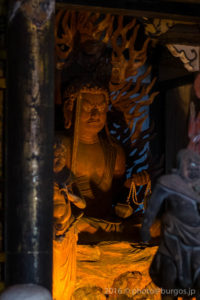 I was saddened by the condition of this temple and how it could be abandoned considering that it  contained these important assets.

From that point onward, I thought about its restoration. However, Oyama-ji has no resources. To make matters worse, it was not registered as an official religious entity.

Oyama-ji had been a temple for Yamabushi ascetics of the Shugen-do, Esoteric Mountain Buddhism.

After the Meiji government banned Buddhism, separating Shinto from Buddhism, the main building became an annex of the Shinto Shrine. From that time, locals who visited the shrine did not recognize the Buddhist temple or the Shinto shrine.

They have completely ignored that Oyama-ji is a Buddhist temple with a great Main image such as Fudo Myoo.

Before I was assigned to Oyama-ji, the building had survived thanks to the efforts of the local elders who continued to hold ceremonies and events such as Setsubun-e, Dai Hannya-e, Saito Goma, and Hiwatari-sai. 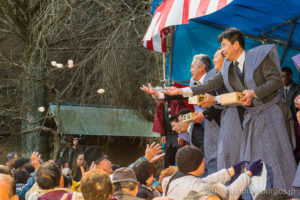 However, these efforts did not seem to be enough to attract interest in restoring the temple.

I had a number of objectives in mind.

Second, we need to concentrate on the restoration of the building. However, as a priest, I have little business skills or experience in raising funds. My strongest skill, as a priest, is the ability to pray to the main Image of the temple, the statue of Fudoo Myoo.

In 2011, the year of Tohoku earthquake and catastrophe, I decided to attempt Sho Hassenmai Goma-Ku Shugyo to pray for revival of the country and also, for restoration of the main building. This ceremony is considered to be the most important mystic ceremony of Esoteric Buddhism. 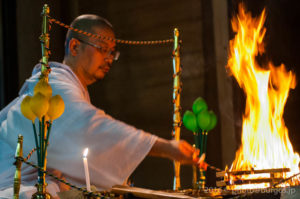 Halfway through the ceremony, I was beset with many obstacles. However, I was able to complete the ceremony safely. This activity seemed to have gradually influenced the locals. Since then, through the efforts of the local council members and public support, the Oyama-ji Restoration Project was founded.

I have decided to attempt the Sho Hassenmai Goma-ku Shugyo for a second time to concentrate solely in prayer for the restoration of the temple and to match the efforts of the locals who volunteer their precious time and energy for this project.